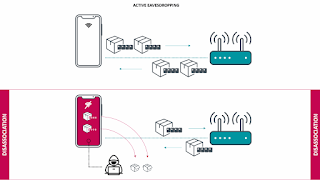 Do not panic as patches should now be available

This vulnerability is classified as low-risk and firmware patches will address the problem.

The vulnerability can be exploited during a MAC-level process known as disassociation, which is the very short window of time when a client and AP terminate a Wi-Fi connection between the two devices. During disassociation of the Wi-Fi client, encryption keys are deleted immediately and replaced by an all-zeros key. The hardware does not accept further Wi-Fi traffic for transmission, but traffic already in the transmission queue is not flushed immediately. For a brief instance, frames already buffered in the hardware transmit queue will be encrypted using the all-zeros key and then transmitted. An attacker monitoring this transmission could decrypt a few frames. In other words, the worst-case scenario is that only a few frames are decrypted, so the risk of exposure of any vital information is minimal. However, a black-hat attacker could gain access to several kilobytes of sensitive data, especially if the attacker initiated the disassociation process repeatedly.

Also, Kr00k is not tied to either an 802.1X or PSK password. Therefore, the vulnerability does not affect password security, and changing it does not hamper the ability of attackers trying to exploit the vulnerability. Also, be aware that implementing management frame protection (MFP) does not prevent this attack. The resolution is a firmware patch. Full details about Kr00k are available from ESET at https://www.eset.com/int/kr00k/